In the previous article (http://ponnadi.blogspot.in/2013/06/anthimopaya-nishtai-10.html), we observed the divine glories of srI rAmAnuja's sishyas. We will continue with more such incidents (mainly embAr's nishtai) in this article. 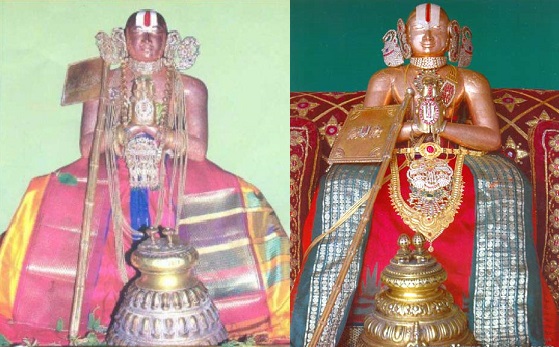 embAr (gOvindhar) was born in vattamaNi kulam (a particular family lineage) and was most knowledgable, very detached and was following anushtAnams properly even at a young age. At that time, he became a devotee of shiva, entered in to saiva Agamam, wore rudhrAksha mAlai and went to kALahasthi. There he became the chief priest and controller of the shiva temple. He was having sticks/leafs in hands (which are pleasing to shiva) and was constantly singing the glories of shiva being an expert in thamizh language. At that time, periya thirumalai nambi (srI saila pUrNar) arrives at kALahasthi for a particular reason (to reform gOvindhar) from thirumalai. He sits along with his sishyas in a wooded area (forest) and starts discussing with his sishyas. At the same time, embAr arrives into the same area to pluck flowers for rudhran and he starts climbing on a tree near where thirumalai nambi was sitting. Seeing embAr's state, thirumalai nambi feels very sorry for him and thinks "Since this jIvAthmA (embAr) is a great vidhwAn and very detached person, if he gives up his devotion for what is not meant for the jIvAthmA and that is very lowly and becomes a devotee of srIman nArAyaNa who is the most apt master for the jIvAthmA, it will be most beneficial for the whole world". He then goes right close to the tree where embAr was picking flowers and starts explaining vEdhAntha verses which establishes the supremacy of srIman nArAyaNa and discusses the same with his sishyas. embAr, forgetting his services at the temple and the plucking of flowers, starts listening the divine words of thirumalai nambi and becomes very ecstatic and stays there for a long time.

Seeing embAr's favourable attitude, nambi thinks "Let us explain a pAsuram from the divine srIsUkthis of nammAzhwAr to purify his mind" and starts explaining the following pAsuram from thiruvAimozhi (2.2.4) in great detail.

Simple translation: emperumAn created brahmA to perform vyashti srushti, i.e., to create all beings and variety of aspects (bhagavAn first does samashti srushti himself directly - where he creates upto pancha bhUthams and performs vyashti srushti indirectly through brahmA). Apart from emperumAn, is any one else qualified to accept flowers and prayers? (No one else is qualified).

Hearing this, since embAr is an expert in thamizh, he at once drops the flower basket and climbs down the tree claiming "No! No!" and says "I have wasted so much time in my life serving this dhEvathai who is filled with thamO guNam by regularly bring water for his bathing, etc" and falls at the lotus feet of thirumalai nambi. nambi, being pleased that his objective was fulfilled, instructs embAr to purify himself by bathing. embAr throws his rudhrAkhsha mAlais and remvoves off his pAshaNdi vEsham, bathes and returns with the wet cloth with great desire to accept nambi as his AchArya. nambi becomes very pleased with him and at once performs pancha samskAram to him, explains him clearly thyAjyam (what is to be given up) and upAdhEyam (what is to be accepted) and instructs "give up all attachments to every thing other than bhagavAn, hold on to srIman nArAyaNan and stay faithful towards our dharisanam". embAr accepts that with gratitude and starts leaving to thirumalai with nambi.

At that time, many pAshaNdis of kALahasthi arrives there and says to embAr "You are our chief so you cannot leave us" and embAr replies from a distance "Hold on to your sticks and leaves; I wont be in this graveyard any more". Just like sIthA pirAtti left lankA without any attachment towards that place and like mukthAthmAs travel in archirAdhi gathi towards paramapadham with the guidance of hArdhan (a form of emperumAn), embAr goes to thirumalai which is considered as bhUlOka vaikuntam with the guidance of thirumalai nambi, stays there as a close confidante of thirumalai nambi and serves him always.

udayavar arrives to thirumalai (thiruppathi) and learns the essential principles of srIrAmAyaNam from thirumalai nambi and plans to return to srIrangam. Considering srI rAmAnuja as a special incarnation and seeing him as ALavandhAr himself, thirumalai nambi asks his sons to take shelter of udayavar and tells him "I still want to offer you something valuable". udayavar, seeing embAr's devotion towards his AchArya, requests nambi to bless him by sending embAr with him to srIrangam. nambi happily accepts the request and hands over embAr through the process of udhagadhArA (using holy water to donate so that the transaction is complete). embAr leaves with udayavar and travels for 4/5 days and starts sulking due to separation from nambi (his AchArya). udayavar asks embAr "Why are you so sad?" and says "If you are unable to deal with separation from your AchArya, you return to thiruvEngadam". embAr happily travels back 4/5 days and reaches the thirumALigai (residence) of thirumalai nambi and falls at his lotus feet. nambi says to embAr "I have given you to udayavar by the udhagadhArA process. Why did you return here now?" and embAr explains that he was unable to bear the separation from him. nambi says "We cannot feed a cow that was sold to some one else. Now you should be totally surrendered to udayavar and serve him" and pushes him out without even offering some prasAdham to embAr. Realising his AchArya's intentions, embAr decides that udayavar's lotus feet are the only refuge and returns to srIrangam. He serves udayavar happily and stays there since then.

Once in an assembly where udayavar and his sishyas were present, udayavar's sishyas start glorifying embAr's gyAnam, bhakthi, vairAgyam, etc. embAr nods his head in acceptance saying "Yes! that is correct" and glorifies himself more than others. Seeing that, udayavar says "If others glorify you, you should be very humble and say that you are not worthy of their praise. Instead you are glorifying yourself. Is this proper etiquette?" and embAr replies "swamy! if these srIvaishNavas glorify me - I am truly worthy of being glorified only for staying in kALahasthi with the lowly form of stick and pot in hand, rudhrAksha mAlai on my neck, etc. But, your highness have done so much favours in purifying me as said in 'pIthagavAdaippirAnAr biramaguruvAy vanthu' (பீதகவாடைப்பிரானார் பிரமகுருவாய் வந்து - bhagavAn himself appears as the first guru). I was so fallen - more fallen than a nithya samsAri - but you have changed me such that these srIvaishNavas glorify me. So, everytime I or some one glorifies me, that really means your highness is being glorified". udayavar says "Dear gOvindha perumAL! fantastic! fantastic!" and becomes very pleased seeing embAr's nishtai.

An AchArya explains to his sishya clearly what is to be accepted and what is to be rejected. The sishya is unable to follow the principles. The AchArya then corrects him wherever he commits mistake (as said in 'skAlithyE sAsithAram'). The sishya meets a learned person who sees that the sishya is not ready to be instructed by the AchArya and the learned person becomes upset and says "The AchArya should only instruct sishyas who are ready to act fully based on AchArya's instructions. Why did your AchArya instruct you?" - this was explained by my AchAryan (mAmunigaL). Thus it is established that

A sishya of nanjIyar who lives in a different place visits nanjIyar and serves him for some time. He then decides to return back to his town. A close confidante (sishya) of nanIyar notices this srIvaishNava returning back and tells him with sorrow "Oh! its unfortunate that you have to leave jIyar's lotus feet and return to your residence" and that srIvaishNava replies "Wherever I am, I still have the mercy of my AchArya" and consoles himself. A srIvaihNavi (close confidante sishyai of nanjIyar) hears this conversation, observes that the srIvaishNava who is returning home is not anguished about the separation from his AchAryan and says "Enaththu uruvAy ulagidandha UzhiyAn pAdham maruvAdhArkku uNdAmO vAn?" (ஏனத்து உருவாய் உலகிடந்த ஊழியான் பாதம் மருவாதார்க்கு உண்டாமோ வான்? - mudhal thiruvanthAdhi 91 - If one does not worship the lotus feet of varAha perumAL who rescued earth, how will he reach paramapadham? - The context is - if this is said about emperumAn's lotus feet itself, what to speak of not worshipping AchArya's lotus feet every day). This incident is narrated by my AchAryan (mAmunigaL). From this, we can understand that if the sishya moves away from his sadhAchArya, he will not know what it is to be accepted and what is to be rejected. Then, ignorance will consume him and will not accomplish the ultimate result of reaching paramapadham.

When kongunAdu (coimbatore region) was affected by drought, a brAhmaNa and his wife comes to srIrangam to live there. Those days, emperumAnAr would perform mAdhukaram (beg for food) in 7 houses. When he walks on the streets, near agaLanganAttAzhwAn prAkAram (one of the seven layers around the temple), all the srIvaishNavas would bow down at the lotus feet of emperumAnAr. The brAhmaNa and his wife would watch that from their house upstairs in that neighbourhood. One day, emperumAnAr visits their house and the woman steps down from upstairs. She asks emperumAnAr "All the kings are bowing down at your lotus feet; But here you are begging for food. What is the reason for this?" and emperumAnAr responds "Since I give them good instructions they are worshipping me". She bows down at his lotus feet and asks "Please give those good instructions to me as well". emperumAnAr out of his divine grace instructs her (the dhvaya mahA manthram) at once. Subsequently, normalcy returns to their native land and they prepare to leave srIrangam. The lady becomes worried that she may not be able to meet emperumAnAr again before leaving. At that time, emperumAnAr arrives there for mAdhukaram and she tells him "We are returning to our native place; Please repeat those divine instructions again to me so that it stays deep-rooted in my heart". emperumAnAr mercifully gives her those same instructions once more. She again asks "Please bless me something more to protect myself always". udayavar immediately removes his pAdhukAs (sandals) gives them to that lady who is named periya pirAttiyAr. From that day onwards, she kept those pAdhukAs in her thiruvArAdhanam and worshipped them with love. This incident is well known from vArthAmAlai. From this we understand that, In this samsAram people will even ignore emperumAn - in such case it is rare to develop total devotion towards AchAryan and accepting something related to that AchAryan (like the pAdhukAs in this case) as total refuge. Such people who have developed faith in AchArya should be like periypirAttiyAr of kongu dhEsam. We can also remember the lives of ponnAchiyAr (wife of piLLai uRangA villi dhAsar), thumbiyUrk koNdi, Ekalavyan, vikramAdhityhyan who were all AchArya nishtars.

Translator's note: Thus, we have seen the nishtai of embAr and other sishyas of udayavar how they manifested total dependence on srI rAmAnuja.

Full series can be viewed at: http://ponnadi.blogspot.in/p/anthimopaya-nishtai.html.