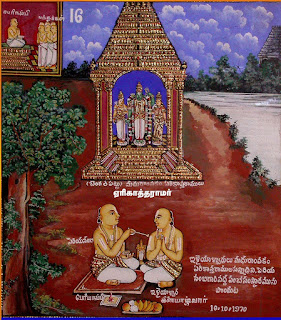 
How do we become a SrIvaishNava?

According to our purvAchAryas, there is a mechanism through which one becomes a SrIvaishNava. This process is called "pancha samskAram" (initiation in to the sampradhAyam).

samskAra means the process of cleansing or purifying. It is the process which transforms one from an unqualified state to a qualified state. It is by this process one first becomes a SrIvaishNava. Just like taking birth in a brAhmaNa family makes it easy for someone to become a brAhmaNa by going through the brahma yagya process, taking birth in a SrIvaishNava family makes it easy for someone to become a SrIvaishNava through the pancha samskAram process. The beauty here compared to the brAhmaNa family example is, one need not be born in a SrIvaishNava family to become a SrIvaishNava - because SrIvaishNavam is associated to the soul while brAhmaNyam is just associated with the body. There is no distinction done based on caste, creed, nationality, sex, financial situation, family situation, etc - whoever desires to be put on the path of salvation can be included in this fold. Also, after becoming a SrIvaishNava, it is very important to completely avoid any association with dhEvathAntharams (demi-gods like brahmA, Siva, dhurgA, subramaNya, indhra, varuNa, etc., who are controlled by emperumAn) and those who are associated to such dhEvathAntharams.

pancha samskAram or samASrayaNam is the process that is explained in SAsthram to prepare an individual to become a SrIvaishNava. The following SlOka explains the different aspects of pancha samskAram - "thApa: puNdra: thathA nAma: manthrO yAgaScha panchama:". The five activities which happen during the pancha samskAram are:
Prerequisites

Akinchanyam (considering oneself to be completely incapable/unworthy) and  ananya gathithvam (having no-other go) are two important prerequisites before Surrendering to emperumAn. Only in such state, one can fully surrender to emperumAn and let emperumAn uplift oneself.

Goals of pancha samskAram
Here, the AchArya administers the divine union of jIvAthmA and paramAthmA. Though we are called prapannas at times, in real sense, SrI rAmAnuja and all our predecessors have shown that we are Acharya nishtas, i.e., one who depend fully on AchArya for everything. This pancha samskAram is also considered as the real birth for the jIvAthmA, since it is at this point, the jIvAthmA realizes its true nature and surrenders to emperumAn. It is because of this divine connection which is like the bondage between a husband (paramAthmA) and wife (jIvathmA), there is constant emphasis of avoidance of other dhEvathAs.

So, as explained here, this philosophy of SrIvaishNavam is to leave this samsAram (material realm) to go to parama padham (spiritual realm) to perform uninterrupted kainkayam to Sriya:pathi (Sriman nArAyaNan).

Who can perform pancha samskAram?

SrIvaishNavam, although an eternal philosophy, was rejuvenated by AzhwArs and AchAryas. Sri rAmAnuja studied the SAsthram and re-established the norms which were lost over time based on the instructions from his preceptors - nAthamunigaL, ALavandhAr, etc. He established 74 simhAsanAdhipathis (AchAryas/spiritual preceptors) and authorized them to perform pancha samskAram to the individuals who understand this goal of life (leaving samsAram to go to paramapadham). Anyone who comes in those lineages can perform pancha samskAram. He (as well as maNavALa mAmunigaL) established certain Mutts (Monasteries) and jIyar swAmis (sanyAsis) whose lineages are also authorized to perform pancha samskAram to individuals aspiring to become a SrIvaishNava.

What should we do on the day of our pancha samskAram or samASrayaNam?

Is pancha samskAram the beginning or the end?

It is common misunderstanding that, this samASrayaNam is a simple ritual and is the end. But that is completely wrong. This is the beginning of our journey in SrIvaishNavam. The ultimate goal is set (to be engaged in eternal service to SrI mahAlakshmi and SrIman nArAyaNan) and the process is given by our purvAcharyas - accepting bhagavAn as the means through the AchArya and be willing to joyfully follow the principles outlined by the AchArya. It is most fitting for the true nature of every jIvAthmA to accept this principle, apply it practically in their day-to-day lives and be uplifted.

In mumukshuppadi, sUthram 116, piLLai lOkachArya highlights the conduct of a SrIvaishNava (one who has undergone pancha samskAram).
For more detailed explanation of these points, please visit http://ponnadi.blogspot.in/2012/08/srivaishnava-lakshanam-5.html .

At this point, we should also be grateful towards bhagavath rAmAnuja who institutionalized this pancha samskAram in a grand manner and propagated the same through many of his disciples (74 simhAsanAdhipathis). All of that was done by him due to his overwhelming compassion towards all jIvAthmAs who are covered with ignorance in this material world and are shunning from their natural duty of performing mangaLASAsanam (praying for the well-being) to emperumAn. We will see more about this aspect in subsequent articles.