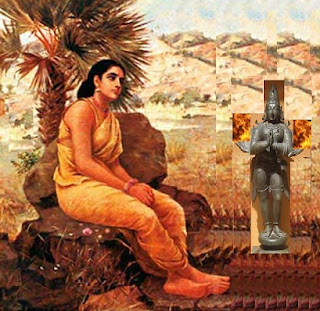 chANdili - garuda incident (When garudAzhwAr thinks about chANdili residing in a secluded place instead of a holy place, his wings burn down at once)


In this article we will understand the different types of apachArams (offences or misdeeds) that SrIvaishNavas should avoid.

For SrIvaishNavas, SAsthram is the foundation - we depend on SAsthram for every action we do. SAsthram means that which instructs us on what to do (vidhi) and what not to do (nishEdham). Primarily SAsthram instructs us to perform our nithya karmas (daily activities) and namiththika karmas (periodic/specific activities) and restrain from theft, attachment towards others' properties, violence, etc. Our pUrvAchAryas took the essence from the SAsthram and consolidated them for us.

Let us see one by one in detail:

akruthya karaNam
SAsthram in general asks us to refrain from the following items:
It is important for a SrIvaishNava to first follow the sAmAnya SAsthra vidhi and avoid the nishEdha vishayams.

Out of these, discriminating/disrespecting based on a SrIvaishNava's birth is the cruelest one. This is considered to be even worse than valuing the archA vigraham (deity) of emperumAn based on the raw material it is made of (it is already explained that this is similar to questioning the purity of one’s own mother).

The fact that we disrespect another SrIvaishNava based on any of the above is in itself sufficient to cause bhAgavatha apachAram. Our pUrvAchAryas have maintained such strict standards while dealing with other SrIvaishNavas. They were cautious all the time. For example, even an AchArya will treat his Sishya with utmost respect - that is the level of dignity they were maintaining. What we see today to some extent is total degradation - even the Sishya is not giving respect to his/her own AchArya and saying things like "well, he is not so knowledgable.", "but he is also after money, how can I respect him?", etc. It is best for the Sishya to respect their AchArya and let emperumAn guide the AchArya in his spiritual pursuit.

The results of bhAgavatha apachAram are also explained in detail here.

Finally, we should understand a very important point. As we understand/believe that, "we get mOksham purely by our relationship to our AchArya irrespective of our gyAnam and anushtAnam", the same way "we will fall down to the bottom of samsAram purely by our apachAram to a SrIvaishNava irrespective of our gyAnam and anushtAnam".

asahya means without any reason. These are the apachArams we commit towards emperumAn, AchArya or SrIvaishNavas without any specific reason.

Our pUrvAchAryas were very respectful to SAsthram and were very fearful of commiting any apachAram. Every AchArya in our guruparamparai (as we can see from their history), towards the end of their life in this samsAram, will gather all their Sishyas and other SrIvaishNavas and ask for their forgiveness even though they did not commit any apachAram at all. Such was their humility.

For us also, it is important to understand this clearly, and try to apply in our lives. gyAnam (knowledge) exemplifies when it leads to anushtAnam (practice) - if that does not happen that gyAnam can simply be the called agyAnam (ignorance).

We should also understand clearly that this does not mean that SrIvaishNavas did not share their knowledge in SAsthram to other SrIvaishNavas fearing that it will cause bhAgavatha apachAram. If that were the case, we would not have so many granthams by our pUrvAchAryas and even contemporary AchAryas in our sampradhAyam explaining how we should live. The goal of these granthams is to educate us to develop these good qualities by reading them.