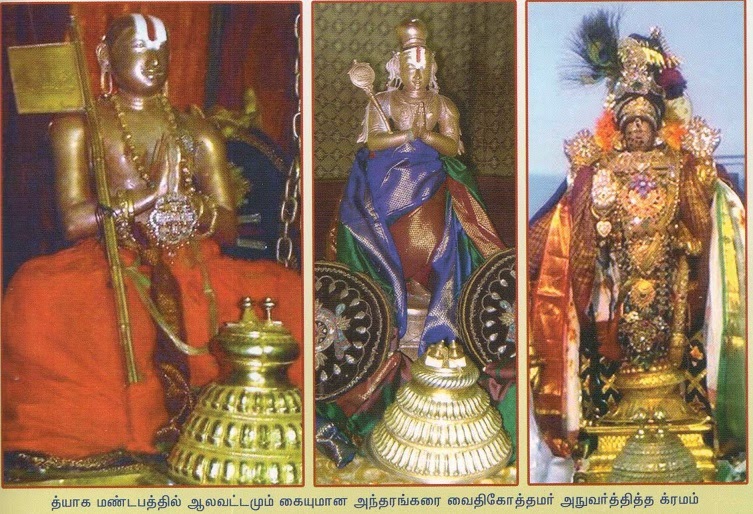 jAthi nowadays has become more associated with brAhmaNa, kshathriya, vaisya and sUdhra (varNam). But we should understand this is not actually truth. Actually, jAthi relates to dhEva (godly), manushya (human), thiryak (animals - growing horizontally) and sthAvara (plants) birth/body. jAthi relates to the type of body (species) and is not for the AthmA (soul). thiryak means animals/birds - the sub-categories include ones that could fly, ones that walk, ones that crawl, ones that live in water, ones that live in land, ones that live in forest, ones that live in towns, etc. sthAvara includes trees, plants, shrubs, bushes, creepers, etc. Height (tall, short), Color (black, red), etc., does not distinguish different species. In bhagavath gIthA, kaNNan emperumAn explains that all 4 varNams are created by him and they are classified by ones qualities and actions. The topic discussed in this section is very confidential and intrinsic. We will try to present it as simple as possible. The aspects that are discussed in rahasya granthams like srIvachana bhUshaNa dhivya sAsthram, etc., are only explained here.  We can recollect the words of mAmunigaL "Ar vachana bhUtaNaththin Azh poruLellAm aRivAr? Ar athu chol nEril anuttippAr?" (ஆர் வசன பூடணத்தின் ஆழ் பொருளெல்லாம் அறிவார்? ஆர் அது சொல் நேரில் அனுட்டிப்பார்? - Who can fully understand the meanings of srIvachana bhUshaNam? Who can follow such instructions fully?). With this in mind we can go into this section.

Translator's note: jAthi has different meanings. Generally it relates to different species - dhEva, manushya, thiryak, sthAvaram. But beyond this, jAthi is occasionally related to varNam also in some places (since it also relates to type of birth in a particular family). Overall, jAthi relates to body and birth. For example, dhvija means twice born (brAhmaNa, kshathriya, vaisya) - every one is said to be born as sUdhra and through the upanayana samskAra they become dhvija. After upanayanam, all dhvijas (brAhmaNa, kshathriya and vaisya) become eligible for brahma gyAnam through vEdha adhyayanam (study of vEdhas). It is not that one randomly chooses to become a brAhmaNa, kshathriya and vaisya. Generally, one is born in a particular family based on ones previous karmA (not randomly). So, if some one is born in a brAhmaNa family, they are given an opportunity to become a brAhmaNa. Once they become a brAhmaNa, they need to uphold their principles. One must study vEdhas properly from an AchArya and act according to the principles of vEdhas as learnt from the AchArya. This is how one can maintain their brAhmaNyam (quality of being a brAhmaNa). Similarly, each varNam members engage in their own activities to uphold varNAsrama dharmam which is said to be very dear to srIman nArAyaNa and is established for the proper functioning of the society and to help everyone progress spiritually. The main activities of different varNams are:
The above principles are nicely explained by mAmunigaL in vyAkyAnam of azhagiya maNavALa perumAL nAyanAr's AchArya hrudhayam 31st chUrNikai.

In AchArya hrudhayam 33rd chUrNikai, nAyaNar beautifully compares this second birth (dhvija) with another second birth - which is one becoming a vaishNava through pancha samskAram. Just like the second birth of body facilitates one to be engaged in vaidhIka karmAs, pancha samskAram facilitates the second birth of AthmA to be engaged in proper servitude to srIman nArAyaNa (and his devotees). Though AthmA is eternal, through the learning thirumanthram (asthAksharam), the jIvAthmA truly understands his real nature as an eternal servant of srIman nArAyaNa. mAmunigaL beautifully explains in the commentary of this chUrNikai, where gAyathri manthram (mother of all manthrams) is facilitating one becoming a brAhmaNa and thirumanthram (mother of all gAyathri manthram) is facilitating one becoming a vaishNava. brAhmaNa is called karma nishta (one who is simply focussed on karmA) and vaishNava is called dhAsa bhUtha (one who is fully focussed on servitude). Subsequently, nAyanAr explains the many differences between the two categories - karma nishtas and dhAsa bhUthas.

Also in the 37th chUrNikai, nAyanAr explains that just like ones brAhmaNyam (being a brAhmaNa) is established by studying of vEdham, understanding its meanings and practicing the principles outlined in vEdham, ones vaishNavathvam (being  a vaishNava) is established by learning thiruvAimozhi (and other dhivya prabandhams) from an AchArya directly, understanding its meanings through instructions from an AchArya and practicing the principles in ones life.

In this section, the importance of being a vaishNava or a prapanna (one who is surrendered to srIman nArAyaNa) and the qualities that are important for vaishNavas are explained in depth. With this introduction, let us move on to the section.