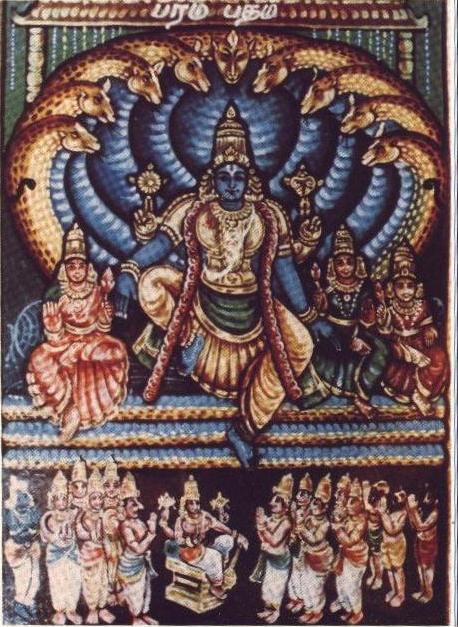 But at the same time, he is also constantly thinking about the jIvAthmAs who are in the samsAram (leelA vibhUthi) who are engaged in materialistic activities and are losing out on all of these anubhavams in paramapadham. Imagine a father who has 2 sons of which one is being very good natured and well behaved and the other is being very immature and ill behaved. While the father will be happy for the well behaved son, he will also try to help out the ill behaved son. Just like that, emperumAn being the father of all jIvAthmAs, is sad to see that while some jIvAthmAs (nithyas and mukthas) are engaged in nithya kainkaryam, there are others (samsAris) who are fully engaged in materialistic activities.

It is explained by our pUrvAchAryas that emperumAn manifests himself in five different modes. This is explained as "parathvAdhi panchakam (பரத்வாதி பஞ்சகம்)". The five different modes are:
It is through this archAvathAram, emperumAn attracts everyone in samsAram, reforms them and guides them to take shelter of them. It is also through archAvathAram, emperumAn enters into the hearts of AzhwArs and AchAryas, conquer them and get them to bring more and more jIvAthmAs to him. 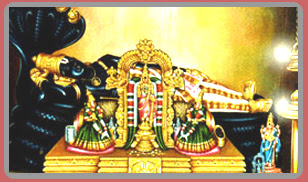 emperumAn is full of great qualities like vAthsalyam (motherly forbearance), souseelyam (magnanimity), soulabhyam (easy accessibility), kshamA (forgiving others mistakes), etc. In paramapadham, every one is pure. So, he has no opportunity to show any of these qualities there. But when he descends to the leelA vibhUthi, its filled with different kinds of people who have all kinds of defects in them. So, it is here in samsAram through his archAvathArams only he fully manifests all of  these great qualities.  For example, as an archAvathAra mUrthy, even if the archakar is committing a mistake, he kindly accepts that. If the archakar is offering bhOgam only once a day, emperumAn happily accepts that. If the archakar only performs thirumanjanam once a week, he accepts that as well. This way, the supreme independent being makes himself completely dependent on some one else out of his love towards that person. This quality is appreciated by AzhwArs and AchAryas as the greatest quality of emperumAn and is only manifested fully in archAvathAram.

Our pUrvAchAryas show that AzhwArs are specifically hand picked by emperumAn from samsAram. He selected 10 jIvAthmAs and gave them divine knowledge and made them AzhwArs. AzhwArs themselves show in their pAsurams how they were completely reformed by emperumAn.

Even though AzhwArs have generally sung pAsurams on different manifestations of emperumAn, they were unanimously focussed on archAvathAram. Every AzhwAr sung on archAvathAra emperumAns and based on their mangaLAsAsanam, 108 kshEthrams became to be famously known as dhivyadhEsams. It is also seen that AzhwArs surrendered to archAvathAra emperumAn in many of their pAsurams. Because of AzhwArs' proximity and attachment to archAvathAra emperumAns, these dhivyadhEsams have become the core focus of the AchAryas who appeared subsequently. kOil (srirangam), thirumalai (thiuvEnkatam), perumAL kOil (kAnchipuram), etc were flocked by the AchAryas and were the centers of bhagavath anubhavam and kainkaryam.

We need to understand the greatness of archAvathAra emperumAns as explained by our pUrvAchAryas. Once we understand that, we can fully commit ourselves to many dhivyadhEsams, mutts, AchArya thirumALigais and our own homes where emperumAn has arrived and waiting to accept us with so much love. If we understand his love, we can also try to reciprocate it atleast to some extent.