emperumAnAr explains to vangi puratthu nambi the obstacles that are faced by srIvaishNavas in various aspects of day-to-day life. vangi puratthu nambi documents these instructions in a wonderful grantham with commentary named virOdhi parihArangaL (removal of obstacles). We are now viewing the English translation of this grantham with the help of the explanations given by srI u. vE. V V Ramanujam swamy. The whole series can be viewed at http://ponnadi.blogspot.in/p/virodhi-pariharangal.html. 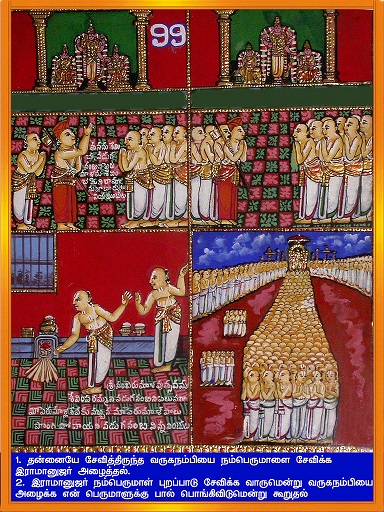 vaduka nambi was greatly devoted to emperumAnAr without any consideration for himself
anAptha (untrustworthy persons/aspects that are unfavourable for oneself) is the opposite of Aptha (trustworthy persons/aspects that are favourable for oneself). The matters discussed in this section also reflects the same principle. Translator's note: This section is really a continuation of the previous section. What is unfavourable for the spiritual nature/progress of the jIvAthmA is discussed in this section.