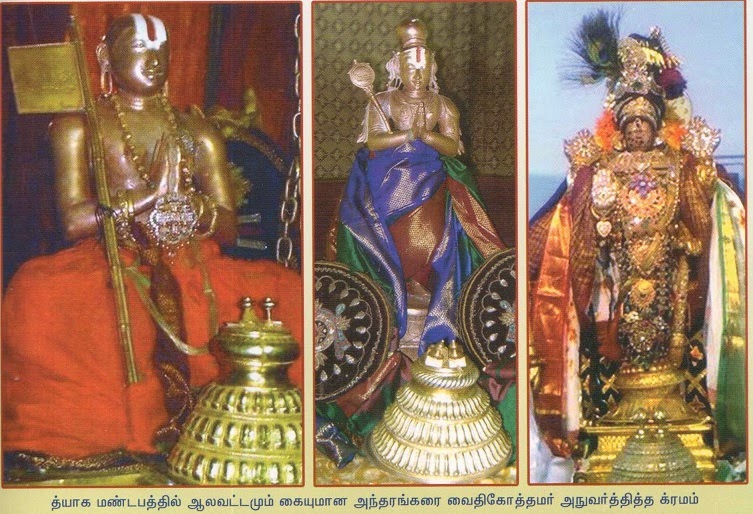 bhOjyam means that which is consumed. In this section, the places where we can consume food and cannot consume food are discussed in detail. Translator's note: When it comes to accepting food or eating, there are so many restrictions. Previously, many vaidhikas (followers of vEdham) used to follow "parAnna niyamam" - i.e., not accepting from any one else (only self cooking) and ofcourse accepting prasAdham from sannidhis (temples, mutts). Nowadays, there is tangential change - most people do not know cooking and depend on outside food (that too not prasAdham) only. Generally, sAthvika food items can be offered to emperumAn and consumed by srIvaishNavas. The food we eat must be well analysed before consuming - it must be cooked by srIvaishNavas, bhagavath prasAdham and fit to be consumed for the individual at that particular time. For example, wonderful meal may be cooked by srIvaishNava and offered to emperumAn too - but on an EkAdhasi such elaborate food items cannot be consumed. When it comes to food items, 3 types of limitations arise in consuming them - jAthi dhushtam (food items that are unfit to be considered by nature - onion, garlic, etc), Asraya dhushtam (sAthvika food items that have come in contact with avaishNavas) and nimiththa dhushtam (food items that are spoilt, etc). In any of these cases, such food items cannot be considered by us. Also, in bhagavath gIthA 17.8 to 17.10, kaNNan emperumAn explains in detail, what types of food to be avoided such as the food that is kept for more than a few hours, the food that has lost its natural flavour, the food which has become stale, etc. It is best to learn from elders on the various matters related to food and consume only what is appropriate for each individual. Please view detailed discussion on AhAra niyamam at http://ponnadi.blogspot.in/2012/07/srivaishnava-aahaara-niyamam_28.html and a Q & A (Question and Answer) related to that at http://ponnadi.blogspot.in/2012/08/srivaishnava-ahara-niyamam-q-a.html.


Before proceeding further with the next set of points, let me (srI u.vE. VV rAmAnujam swamy) explain whatever I have observed from elders in relation to AhAra niyamam (food restrictions), whatever I have heard from elders and whatever I have learnt from reading various literature on this topic. In the current times, there are very few who know these principles and the ones who follow such principles are even fewer. Food items (and raw materials) are classified based on its qualities in to sAthvikam (goodness), rAjasam (passion) and thAmasam (ignorance). And, rAjasa and thAmasa food items are forbidden from being consumed by srIvaishNavas. Detailed discussions are in bhagavath gIthA 17th chapter (highlighted at the top). Nowadays, people only care for external hygiene and cleanliness. There is total lack of knowledge about the internal hygiene and cleanliness of the food items. Raw materials should be grown by good-hearted persons who are known to us - they must have been farmed and given by people with good intentions. The ones who cook should have both basic AchAram and anushtAnam -
following rule of conduct and on top of that they should also have svarUpa gyAnam (that they are jIvAthmA who is a servant of bhagavAn). They should also be familiar with srIvaishNava sampradhAya granthams. Let me explain an incident from yathIndhra pravaNa prabhAvam written by piLLai lOkam jIyar. nampiLLai who is a great AchArya had two wives. He once asks a question to his wives separately. First he asks his first wife "What do you think about me?". The first wife responds "I think of you similar to namperumAL himself and as my AchArya". He becomes very pleased and engages her in preparing food for his thiruvArAdhanam and himself. He then asks his second wife the same question and she says "I think of you as my husband". He asks her to assist his first wife in cooking. When the first wife is unable to cook during her menstrual periods, he allows his second wife to cook but he gets his dear sishyas who are great srIvaishNavas to touch the prasAdham first and then he eats that. Thus he shows by practice that one should develop the real attitude in srIvaishNavam so that one becomes fit to serve bhagavAn and bhAgavathAs in cooking kainkaryam. (Translator's note: This nampiLLai incident is re-written in English to match the actual incident since VV Ramanujam swamy had given only a brief note about the incident). During emperumAnAr's times, in his mutt, every one of his sishyas were very great and capable of being an AchArya. Many common laymen, materialistic people, bodily oriented/focussed persons were removed from their services. This is not based on their birth. This is purely based on their mental maturity in bhagavath vishayam. The food we eat should be bhagavath prasAdham. In any situation, we should not eat anything that is not bhagavath prasAdham. We can see that both bhOjana virOdhi (54) and bhOjya virOdhi (55) are focussed on pure heart and sAthvika attitude.
We will continue with the next section in the next article.