We are in the midst of enjoying the divine glories of AzhwArs/AchAryas who appeared in this auspicious month of aippasi. Please view http://ponnadi.blogspot.in/p/aippasi-thula-masa-anubhavam.html for full glories of this month. It is said that "madhurEna samApayEth" - so let us end this year's aippasi anubhavam sweetly. As we are at the end of this month, we will now briefly observe the glories of mAmunigaL specifically his literary contribution to our sath sampradhAyam.

In the 28th pAsuram of Arthi prabhandham, mAmunigaL himself highlights how he spent his time for the upliftment of the entire world.

In the first 2 lines (as split above), mAmunigaL explains that he searched and collected all the pUrvAchArya granthams which were lost/dispersed during muslim invasion. These granthams were written by the great compassion of pUrvAchAryas towards the hitham (well being) of all the future generations. Whatever granthams he found, he wrote them personally in palm leaves, he learnt them from his AchAryans (thiruvAimozhi piLLai, etc), lived according to the instructions in those granthams, and taught those to all his disciples.

In the next 2 lines (as split above), mAmunigaL says, before getting the mercy of emperumAnAr through his AchAryan thiruvAimozhi piLLai, he did not have any desire to go to paramapadham, but once he got that mercy he could not stop thinking about going to paramapadham for even a single moment.

There is a popular thamizh pAsuram which beautifully brings out the glories of mAmunigaL's divine contribution.

Simple translation: In this world where many great personalities engage in glorifying srI ranganAthan who lives in srIrangam which is surrounded by natural beauty, Had the incomparable and gold-like pristine maNavALa mAmunigaL not appeared, the thamizh vEdham (thiruvAimozhi) would have become lost like tamarind mixed in river (tamarind in a big river would have no impact, similarly, Had mAmunigaL not highlight the glories of thiruvAimozhi to the fullest potential, it would have become insignificant in this ocean of samsAram).

mAmunigaL fully focussed on gathering the vast knowledge of our sath sampradhAyam and wonderfully documented the same in the most precise manner for the benefit of everyone. Let us briefly enjoy his various literary contributions and understand the brilliance and benevolence of mAmunigaL. 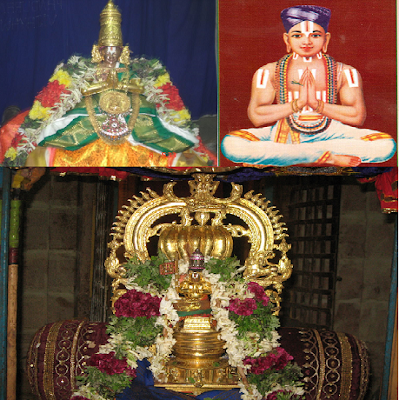 mAmunigaL, towards the end of his time in this samsAram, was writing the vyAkyAnam for  AchArya hrudhayam with great physical difficulties. Seeing this, kOil aNNan enquires mAmunigaL why he should trouble himself in writing with great difficulties. mAmunigaL replies "I am writing for the benefit of your sons and grandsons (i.e. the future generation of srIvaishNavas)" - such was his compassion and concern for future generations to come and he mercifully paved the way for the upliftment of everyone.

We have only focussed on the literary contribution of mAmunigaL in this article. There are so many glorious aspects in the life of mAmunigaL. Every aspect is vAchA magOcharam (beyond the capability of words to explain).

In thaithriya upanishadh, bhagavAn's kalyANa guNams (auspicious qualities) are enquired. vEdham tries to comprehend Anandham (bliss) which is just one of the many innumerable auspicious qualities of bhagavAn but fails to comprehend even that single quality. Similarly, mAmunigaL's glories are innumerable. This only shows a glimpse of his glories that too with adiyen's limited abilities.

Thus we have seen a glimpse of the divine literary contribution of mAmunigaL for our sath sampradhAyam. Let us bow down at the lotus feet of mAmunigaL and be blessed.