kaNNan emperumAn is an expert in mesmerizing others and explaining philosophical principles. His mastery was revealed by him in vrundhAvanam amidst the gopas and gOpis (cowherd boys and girls) and kurukshEthram (in the battle field) amidst the soldiers from kaurava side and pANdava side. 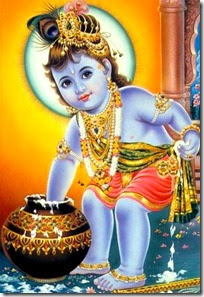 krishNa mesmerized many with his childhood pastimes in vrundhAvanam. Becoming the darling child of yasOdha and nandhagOpa, he pleased everyone in AyarpAdi and attracted them with his charm and affection. The gOpis became so attached to him and could not bear the separation from him even for a single moment. The highlight of his whole krishNAvathAram is his navanItha chauryam (butter theft) and just like he stole the butter, he also stole the hearts of his dear devotees. Not just gOpas and gOpis, even great rishis like vyAsa, suka, sUtha, saunaka, etc., who are vEdhAnthis, were amazed by his leelAs and showed great attachment towards him. Our own AzhwArs too, unanimously sung the glories of kaNNan emperumAn more than any other avathAram of bhagavAn. AchAryas followed suit in glorifying emperumAn in their sthOthra granthams. Thus, kaNNan emperumAn controlled every one through his mastery - from the simple minded gOpis to the vEdhAnthis, the AzhwArs who are filled with bhakthi to the AchAryas who were great gyAnis, etc. 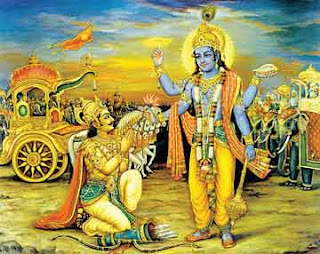 His mission of explaining the essential principles through gIthA is also a wonderful revelation of his mastery. arjuna was raring to go and fight it out with the kauravas. But seeing bhIshma pithAmaha, dhrONAchArya, krupAchArya, dhuryOdhana, etc - who are all related to him one way or the other, he got bewildered. He started shivering out of fear for killing his own kith and kin, teachers and mentors. He dropped his famous/powerful bow named gANdIpam and took full shelter of krishNa. krishNa, having masterfully presented such situation to arjuna, took that opportunity to become gIthAchArya and explained the nature of thathva thrayam (chith, achith, Isvara), karma yOgam, gyAna yOgam, bhakti yOgam, his own opulences (viswarUpam and vibhUthi yOgam), the 3 modes of nature (sathvam, rajO, thamO guNams), etc and completes gIthA with the final verdict on total surrender to himself. Thus, bhagavAn sets up arjuna so that he too can take the role of AchArya and explain the essential principles in a crystal clear way that can be understood by every one. This principle of his liking towards being an AchAryan is highlighted by piLLai lOkAchAryar beautifully in srIvachana bhUshaNa dhivya sAsthram in sUthrams 430 and 431. In these 2 sUthrams, he first explains that "bhagavAn also likes to assume the role of AchAryan" and then he goes on to say "that is why he assumed the role of the first AchAryan in guru paramparai and spoke bhagavath gIthA to arjuna and protected vibhIshaNAzhwAn before rAma-rAvaNa war (explaining the principle of sharaNAgathi)". Eventually, he helps arjuna (and all his brothers and family) in so many ways and ensure that they are well taken care off by enacting so many wonderful situations like hiding the sun to kill jayathradha, etc. 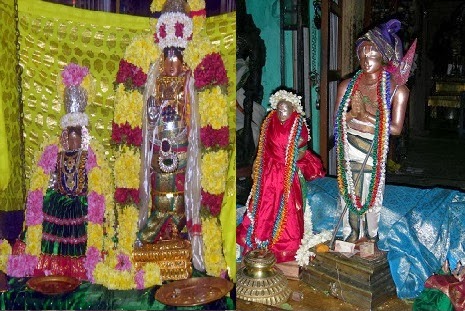 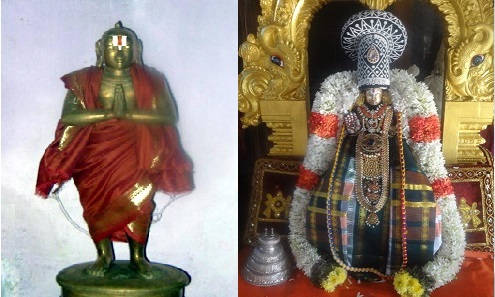 A divine event that happens in thirukkaNNamangai dhivyadhEsam is highlighted in periya thirumozhi 7.10 padhigam where in the last pAsuram, thirumangai AzhwAr says to emperumAn that he can become his sishya and learn the meanings of his thirumozhi pAsurams. To fulfill those words, emperumAn becomes periyavAchAn piLLai (born on AvaNi rOhiNi and named krishNa) and thirumangai AzhwAr becomes nampiLLai (born on kArthigai kArthigai and named thirukkalikanRi dhAsar). periyavAchAn piLLai becomes a dear sishya of nampiLLai, learns all the essential principles (that are coming down via our AchArya paramaparai centered on srI rAmAnuja) from him and shows great regard and affection for his AchArya.

periyavAchAn piLLai is crowned as vyAkyAna chakkaravarthy (emperor among commentators). He has written commentaries for all 4000 dhivya prabandhams, sthOthra granthams and selective slOkams of srI rAmAyaNa slOkams. He has also done rahasya granthams. His mastery in the principles of sath sampradhAyam is uncomparable.

srI rAmAyaNam is called as "sharaNAgathi sAsthram" by our pUrvAchAryas. periyavAchAn piLLai's commentary for selective slOkams of srI rAmAyanam is known as srI rAmAyaNa thani slOkam.

He brings out the most important principles of srI rAmAyaNam for us. The sargam related to vibhIshaNa sharaNAgathi is explained by him in great detail analysing the aspect of sharaNAgathi in the most brilliant way. Let us see an example for his brilliance in writing commentaries by going through his commentary for just one phrase in a particular slOkam in sundhara kANdam 21st sargam 3rd slOkam. Simple translation: sIthA pirAtti picks up a blade of grass and places it in between herself and rAvaNa and starts speaking with merciful and pure smile - "You take your mind away from me and focus it on your own wives with affection".

In the vyAkyAnam for this slOkam, periyavAchAn piLLai explains how rAvaNa approached sIthA pirAtti with inappropriate thoughts and words and how pirAtti mercifully gave him so many instructions/replies to rAvaNa's words. Though pirAtti was initially shivering at the sight of rAvaNa, she composed herself and mercifully starts talking to him and giving him good instructions. Here, periyavAchAn piLLai explains several reasons for pirAtti placing the blade of grass in between herself and rAvaNa. Let us see his various explanations for this phrase "thruNamantharatha: kruthvA" now and understand the glories of periyavAchAn piLLai. He starts with saying that pirAtti first places the blade of grass before speaking - though it is not mandatory to do that every time we start speaking. He goes on to give 26 different explanations for this simple act of sIthA pirAtti.
From this, we can observe the brilliant intelligence of periyavAchAn piLLai in this detailed analysis for a small phrase of an ithihAsa slOkam. This is the distinction between paurANikas (who simply explain purANa/ithihAsa slOkas based on literal meaning) and our pUrvAchAryas (who fully analyze the different context of each word and explain the in-depth and confidential meanings). periyavAchAn piLLai is a radiant sun among such pUrvAchAryas who revealed the wonderful principles of AzhwArs and his AchAryas in his beautiful works.

This is why mAmunigaL greatly glorifies periyavAchAn piLLai's contribution to our sath sampradhAyam in upadhEsa rathina mAlai 46th pAsuram. He says without the commentaries of periyavAchAn piLLai, no one could easily grasp and explain the principles that are in the divine pAsurams of AzhwArs.

The first krishNa we saw here is bhagavAn himself - he is common for both bandham (bondage) and mOksham (upliftment) as he is supremely independent. He can either grant us mOksham (out of his mercy) or keep us in samsAram (due to our karmA and his commitment to oblige by sAsthram). But the second krishNa (periyavAchAn piLLai) is only focussed on the upliftment of jIvAthmAs. AchAryas are totally dependent on bhagavAn and their goal is to purify jIvAthmAs and bring them to bhagavAn for his service. So, obviously we are more attached and indebted to AchAryas and always approach bhagavAn through these glorious AchAryas.
Thus we have seen the mastery of two krishNas - kaNNan emperumAn and periyavAchAn piLLai. This is just a sample of their greatness and brilliance for us to relish - there is so much more to understand and enjoy though.