piLLai lOkAchAryar was leading our sampradhAyam to great heights in srIrangam after nampiLLai. At that time, he hears that ulUk khAn and his soldiers have arrived very close to srIrangam and are planning to attack the temple to rob off the great wealth. piLLai lOkAchAryar decides to carry namperumAL on a divine journey to avoid being there during the attack. He orders to build a wall in front of periya perumAL (mUlavar), arranges another uthsava vigraham in place of namperumAL and proceeds towards a safe place in south along with namperumAL, nAchiyArs and some srIvaishNavas. On the way, piLLai lOkAchAryar, being very old, unable to bear the toil of the stressful journey, decides to ascend to paramapadham at jyOthiskudi (near madhurai). It is at jyOthishkudi, piLLai lOkAchAryar accepts the young thirumalai AzhwAr (srIsailEsar - thiruvAimozhi piLLai) as his disciple and blesses him to be the next leader of our sampradhAyam. Subsequently, namperumAL travels to thirumAlirunchOlai, kOzhikkOde (calicut), thirunArAyaNapuram (mElkOte) and finally arrives to thirumalai and stays there for several years. Eventually, namperumAL returns to srIrangam, after a few kings gather strength and drive out the invaders and peace returns to srIrangam. Subsequently, maNavALa mAmunigaL arrives at srIrangam and re-establishes past glories of srIrangam. Fortunate were the ones who were in srIrangam at that time to have enjoyed the most wonderful times of srIvaishNava sampradhAyam under the able and compassionate guidance of mAmunigaL.
With this background, let us see the divine journey of nammAzhwAr during this period in detail.

While namperumAL was in kOzhikkOde, other near by dhivyadhEsa emperumAns and nammAzhwAr travelled to be with namperumAL for some time. namperumAL being greatly pleased to see nammAzhwAr, asks the archakas to seat nammAzhwAr along with him and his nAchiyArs on his own Asanam (throne). namperumAL also offers his own pearl shirt and other paraphernelia to AzhwAr during this time and greatly enjoys the togetherness with AzhwAr. Subsequently, they leave from kOzhikkOde and go to thEnaikkidambai and stays there for some time. When namperumAL leaves from thEnaikkidambai, he asks nammAzhwAr to stay back (and eventually return to AzhwAr thirunagari). AzhwAr's kainkaryaparars then decides to carry him to further south western region (deep inside kEraLa) since all the other regions are considered unsafe at that time. After going a fair distance, they find a cliff and to protect AzhwAr, they place AzhwAr inside a box and safely bring him down in to the dangerous cliff. After that, robbers attack them and rob all the wealth from the kainkaryaparars.

Among the kainkaryaparars, there was one named thOzhappar who was greatly attached to AzhwAr. While others escape the place fearing thieves and robbers,  thOzhappar rushes to thirumalai AzhwAr (srIsailEsar - thiruvAimozhi piLLai) who is now in-charge of the kingdom (He becomes an important minister in the kingdom and after the king passes away, he takes care off the kingdom and trains the young prince in to the administrative aspects). Hearing about AzhwAr's situation from thOzhappar, thirumalai AzhwAr sends a request to the king of kEraLa region asking for help and protection to safely bring AzhwAr out of the cliff. He also sends some of his close confidantes and wealth to rescue AzhwAr. The kEraLa king, welcomes the soldiers with great respect and at once sends his soldiers along with thOzhappar and others.

They all reach the cliff with huge chains (to go down the cliff to rescue AzhwAr). When everyone was scared to go down the cliff, thOzhappar volunteers to do that task. The kainkaryaparars of AzhwAr thirunagari who were there at that time, being pleased with thOzhappar's dedication, declares that "thOzhappar will be honored every day at par with vakuLAbharaNa bhattar and will get special honours during thirumanjanam as well with an aruLappAdu in the name of 'AzhwAr thOzhappar'". thOzhappar climbs down the cliff in a chained plank and locates the box in which AzhwAr was placed. With the palm leaf and pen he had, he writes down what he observes and places it on the top of the box safely. He first sends AzhwAr up on the plank safely and waits for the chain/plank to return. When the chain returns, he some how slips and falls down the cliff and ascends to paramapadham. thOzhappar's son becomes very sad seeing that, but the kainkaryaparars console him saying that "He is now the dear son of AzhwAr himself and he will receive all the honors that were offered to his father". After that they all reach a place named mundhirippu and perform samprOkshaNam for AzhwAr for 5 days there.

The thieves/robbers who stole the wealth of AzhwAr and his kainkaryaparars hear this divine incident and they return all the wealth to AzhwAr. With that wealth, AzhwAr is carried over to thirukkaNAmbhi where he stays for some time. The archakas, kainkaryaparars, etc., perform thiruvArAdhanam, thirumanjanam and all uthsavams with great pomp and festivity to AzhwAr. A garuda pakshi builds a nest on top of AzhwAr's mandapam and stays there for protection and is considered as very auspicious by all. All the festivals were celebrated in a grand manner and many people from nearby places regularly visit and get the blessings of AzhwAr there. The pOthis and nambUtharis of various dhivyadhEsams (like thiruvananthapuram, thiruvaNparisAram, thiruvAttAru, etc) visit AzhwAr and become so attached to AzhwAr that they dont leave AzhwAr even for a moment. 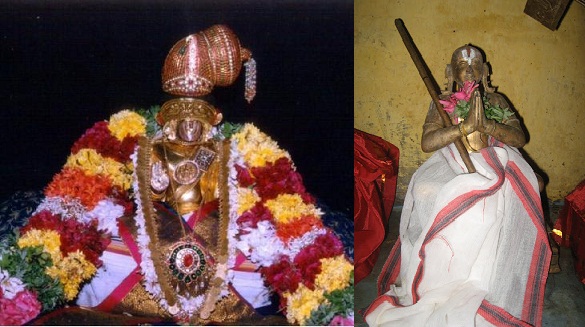 thirumalai AzhwAr learns about AzhwAr's stay in thirukkaNAmbhi and has great desire to go and serve him there. He at once reaches thirukkaNAmbhi and stays there for some time serving him regularly. At that time, he starts thinking about bringing AzhwAr back to his avathAra sthalam (AzhwAr thirunagari). First he goes to AzhwAr thirunagari and observes the whole place has become un-habitable. When AzhwAr left, many followed and left the dhivyadhEsam as well. thirumalai AzhwAr, himself takes up the task of clearing the woods, re-establishing the temple and the surroundings and thus becomes called "kAdu vetti guru" (AchArya who cleared the forests). He then brings AzhwAr over to AzhwAr thirungari and places him close to thiruppuLi AzhwAr (the divine tamarind tree) in his sannidhi. AzhwAr being greatly pleased, gives his own name of "satakOpa dhAsar" to thirumalai AzhwAr. thirumalai AzhwAr happily accepts that honour and becomes to be identified by every one as the target of AzhwAr's mercy. Due to his great attachment to thiruvAimozhi, he also becomes to be called thiruAimozhi piLLai. He also establishes the bhavishyadhAchAryan (emperumAnAr) temple in the western side of AzhwAr thirunagari dhivyadhEsam and builds rAmAnuja chathur vEdhi mangalam (four streets with experts in vEdha/vEdhAntham).

Thus, we have seen the divine journey of nammAzhwAr from AzhwAr thirungari to kOzhikkOde to thirukkaNAmbhi back to AzhwAr thirunagari. We have also enjoyed the great contribution of thiruvAimozhi piLLai to our emperumAnAr dharisanam in re-establishing AzhwAr thirunagari dhivya dhEsam, AzhwAr's proper daily worship, the construction of emperumAnAr (bhavishyadhAchAryan) sannidhi, the four streets around the same and establishing proper daily worship there as well.


archived in  http://ponnadi.blogspot.com , also visit http://guruparamparai.wordpress.com
Posted by Sarathy Thothathri at Monday, May 20, 2013
Email ThisBlogThis!Share to TwitterShare to FacebookShare to Pinterest