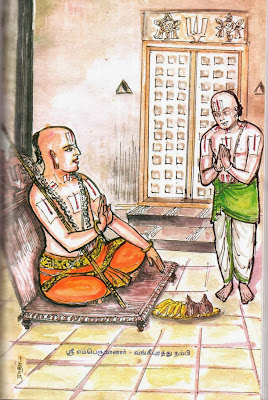 sayanam means sleeping, resting and lying down. In srIvaishNava paribhAshai it is said as "kaN vaLargai" (கண் வளர்கை) similar to bathing is said as "nIrAttam" (நீராட்டம்). Quite a few obstacles are listed in this topic. Let us see them now.

Translator's note: Sleeping may be considered as a casual activity. But as in every activity, one should carefully analyse the various aspects. As highlighted before, a vaidhika means the day is divided in to five parts - abhigamanam (waking up, morning routines), upAdhAnam (collecting raw materials for thiruvArAdhanam), ijjA (thiruvArAdhanam to our home perumAL), svAdhyAyam (learning/teaching of ubhaya vEdhAntham) and yOgam (resting - communion of jIvAthmA and paramAthmA). The yOgam part is what we normally consider as sleep and when the sleep is controlled/directed properly thamO guNam will subdue and satthva guNam will increase. Too much sleeping is considered to be directly related to increased thamO guNam and one should try to improve that by regulating ones routines by waking up early in the morning and engaging the mind and body in bhagavath/bhAgavatha kainkaryam.

uththAnam means rising from the bed. Let us see the obstacles in this topic.