We are in the midst of enjoying the divine glories of AzhwArs/AchAryas who appeared in this auspicious month of aippasi. Please view http://ponnadi.blogspot.in/p/aippasi-thula-masa-anubhavam.html for full glories of this month. We shall now get a glimpse of our most merciful piLLai lOkAchAryar and his divine work srI vachana bhUshaNam through the most beautiful vyAkyAna avathArikai (introduction to commentary) of maNavALa mAmunigaL for this master piece. We have already seen the brief introduction to this glorious prabhandham and its thanians at http://ponnadi.blogspot.in/2013/11/aippasi-anubhavam-pillai-lokacharyar-srivachana-bhushanam-thanians.html.

With this background, let us now see the translation of srI vachana bhUshaNam's wonderful introduction given by mAmunigaL. 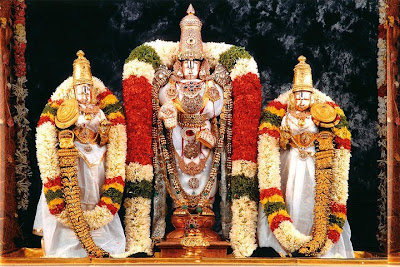 thirumanthram is the essence of the whole of vEdham. The three words in thirumanthram reveals the three principles (ananyArha sEshathvam - being subservient to bhagavAn only, ananya sharaNathvam - accepting bhagavAn as the only refuge, ananya bhOgyathvam -  accepting bhagavAn as the only enjoyable aspect and is also explained as being an object of pleasure for bhagavAn only). These 3 principles are common for all jIvAthmAs. As mentioned in "yathra rshaya: prathama jAyE purANA:" (, even though all jIvAthmAs have the necessary qualification to be in paramapadham (which is fully pure) where every one's knowledge is fully blossomed/expanded, where there is eternal bliss which is derived out of constant engagement in bhagavAn's names, forms, qualities, etc., as said in "anAdhi mAyayA suptha:" (being covered by ignorance since time immemorial) and "thila thailavath dhAru vahnivath" (seemingly inseparable from matter like oil inside sesame and fire inside wood), jIvAthmAs (bound souls) being covered with the beginningless mAyA (which is controlled by bhagavAn) that covers the knowledge and due to beginningless ignorance which leads to accumulated and endless karmA (virtues and vices) which leads to countless births in sura (heavenly), nara (human), thiryak (animals) and sthAvara (plants). In every birth, they go through many pitfalls such as dhEhAthmAbimAnam (considering body as the self), svAthanthriyam (considering oneself as independent), anya sEshathvam (serving any one other than bhagavAn) and engage in efforts and results to fit such qualities. Such jIvAthmAs, with the vow to leave emperumAn in whatever possible manner, being greatly averse to bhagavAn who is the ultimate master and the best goal and means for jIvAthmAs. As a result, the jIvAthmA goes through the seven stages namely garbha (being in the womb), janma (taking birth), bhAlya (being a child who cannot take care of himself), yauvana (youth which is fully focussed on sense enjoyment), vArdhaka (old age), maraNa (death) and naraka (life in hellish planets) which lead to eternal and endless sorrows. Among those suffering souls, for a few who accepts the grace of bhagavAn which is given at the time of birth which subdues the rajO (passion) and thamO (ignorance) guNams (qualities) and sathvam (goodness) raises and the desire for mOksham (eternal upliftment) develops.

Previously, pEraruLALa perumAL (kAnchIpuram varadharAja perumAL), out of his causeless mercy, specially blessed a srIvaishNava named nambi in the town named maNaRpAkkam. He explained some of the essential aspects of the sath sampradhAyam in the svapnam (dream) of maNaRpAkkathu nambi and then instructs him "Now, you go an stay in between the two rivers (srIrangam which is situated in between cauvery and koLLidam), I will reveal the same principles in full details".  nambi, following those instructions, arrive at srIrangam, stays there worshipping periya perumAL and without revealing his identity, just remains there constantly meditating on the principles originally revealed by pEraruLALan. 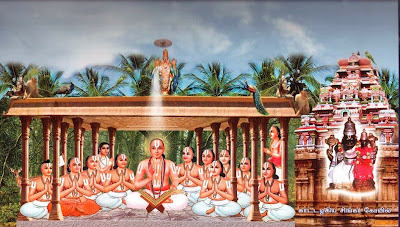 Once when he was alone at kAttazhagiya singar temple (in srIrangam), piLLai lOkAchAryar arrives there along with his sishyas by the divine will of bhagavAn. Since the temple is remotely located with minimum disturbances, he starts explaining the rahasyArthams (confidential matters) of our sath sampradhAyam to his disciples. maNaRpAkkathu nambi who hears them (from a place where the others cannot see him) and understands that they resemble the same meanings that were revealed by pEraruLALa perumAL, becomes ecstatic. He comes out from inside and falls at the lotus feet of piLLai lOkAchAryar and asks him "Are you him?" and piLLai responds "Yes, what should be done?". nambi then explains that pEraruLALa perumAL explained the same principles first and directed him to srIrangam to understand the same in great detail. piLLai lOkAchArar feeling elated, accepts nambi (as a sishya) and nambi starts serving him and learning the principles in detail from him. Once emperumAn appears in the dream of nambi and instructs him to request piLLai lOkAchAryar to document these wonderful and most important principles in a prabhandham so that it is not forgotten over time. nambi goes to piLLai lOkAchAryar and reveals the desire of emperumAn and piLLai lOkAchAryar says "If that is his desire, I will do that" and compiled srI vachana bhUshaNam - this incident is well known and well established.

Just like an ornament that has many rathnams (gems) is named rathna bhUshaNam, since this prabhandham is filled with the words/phrases of our pUrvAchArayas and brings about great radiance of knowledge to the ones who meditate on this prabhandham, it is named srI vachana bhUshaNam. 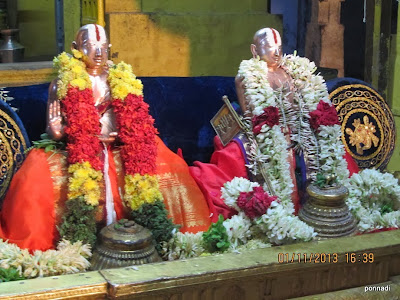 Thus ends the first part of most magnificient introduction section for srI vachana bhUshaNam. This grantham is greatly glorified for presenting the most important principles of our sath sampradhAyam in the simplest possible way. With mAmunigaL's beautiful and precise commentary, this is a great treasure for us to cherish. It is most beneficial if this grantham is heard under an AchArya to understand the principles fully. Let us bow down at the lotus feet of these great AchAryas and be blessed.

In the subsequent articles we will see the continuation of this most wonderful introduction of mAmunigaL for srI vachana bhUshaNam.