Note: srI U. vE. gOpAlakrishNa dhAsar (kOnAr) who was living in chennai and a sishya of kOil kandhAdai vAdhUla aNNan swamy compiled a set of beautiful phrases/sentences from nampiLLai's eedu (documented by vadakku thiruvIdhi piLLai) vyAkyAnam long ago. kOil vidhwAn srI U. vE. R narasimhAchAryar swamy (paramapadhavAsi) wrote simple thamizh meanings for those phrases/sentences. This book (https://docs.google.com/file/d/0ByVemcKfGLucbWJNTUMzVS1KTzA/edit?usp=sharing) was originally released on 7-1-68 and was re-published by puthur raghurAman swamy (editior: srI sailEsa dhayApAthram magazine). In this series we are relishing this great compilation with the english translation for the same. 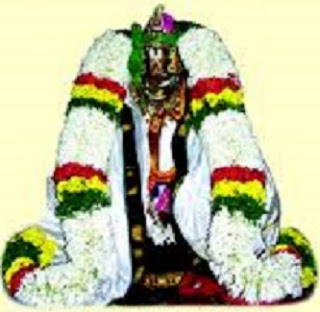 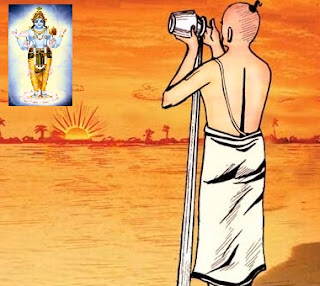 bhagavAn is the ultimate benedictor of all results
Following scriptural injunctions is not the true means.

Translator's note: bhagavAn is the only upAyam to achieve anything. It is only by his sanction everything happens. karma, gyAna, bhakthi yOgams are all achEtanam (insentient - not knowledgable) - they are just processes. bhagavAn is parama chEthanan (supreme sentient being). Seeing one perform karma, gyAna, bhakthi yOgams, he sanctions the result for the act performed by the jIvAthmA. So, he, who benedicts the ultimate goal, is the true means. For a prapanna, such anushtAnams will become part of his kainkaryam since he still performs all karmAs that are applicable to him according to varNAsrama dharmam and sistAchAram (elders acts), but he does not expect anything in return from bhagavAn for such acts. This is elaborated in mumukshuppadi sUthram 271 "karmam kainkaryaththil pugum" (கர்மம் கைங்கர்யத்தில் புகும்) - prapanna's anushtAnams such as sandhyAvandhanam, etc will become part of his kainkaryam towards bhagavAn. 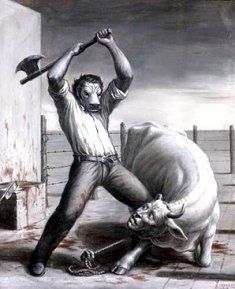 Whatever is rejected in sAsthram, indulging in such practices is not our refuge.

Translator's note: This is related to the previous entry. If one understands that following karmAnushtAnams properly is not the means for the ultimate goal, a counter argument may arise saying "So, we should do what is rejected in sAsthram". But obviously, indulging in what is rejected in sAsthram is never pleasing for bhagavAn. This principle is explained by piLLai lOkAchAryar beautifully in mumukshuppadi charama slOka prakaraNam sUthrams 205 - 210. Let us see the gist of those sUthrams:

Following whatever is ordained in sAsthram is not our refuge (that which protects us).

Translator's note: Again, the same point as in the 81st entry - only bhagavAn is the protector/refuge. 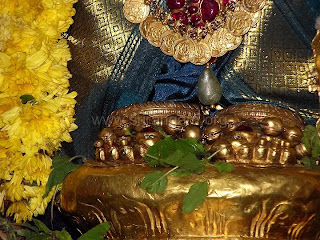 yAthrai - livelihood/spending our time. According to the remainder of (the second) sentence (in dhvaya mahA manthram), our whole purpose/activity is to pray for service the lotus feet of bhagavAn.

Translator's note: dhvaya mahA manthram is made of two vAkyams (sentences). The first sentence is where we accept srIman nArAyaNan's lotus feet as the only refuge and surrender unto him. In the second sentence, we pray for service at the lotus feet of srIman nArAyaNan purely for the pleasure of the divine couple without any self-interest. Here, in the second sentence - srImathE nArAyaNAya nama: - srImathE nArAyaNa is the divine couple (and their lotus feet). Aya is kainkarya prArthanai - our prayer to bhagavAn to engage us in his service. "nama:" highlights that the pleasure derived from such service is purely for bhagavAn not for us. By seeing his pleasure we also become blissful - but that is only a side benefit - the main goal is to bring pleasure to srIman nArAyaNan. 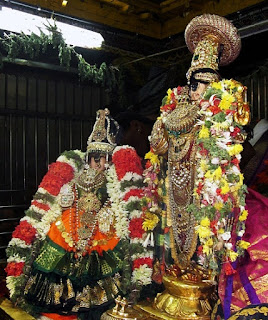 There are thousands of lines written in sAsthram. But the intelligent ones, will not focus on so many of them but will be fully focussed on the essence of sAsthram which is glorifying bhagavAn's divine names. This is highlighted by bhUthathAzhwAr in iraNdAm thiruvanthAdhi pAsuram 39.

Transator's note: In this pAsuram, the importance of the divine names of bhagavAn especially mAdhavan (the husband of srI mahAlakshmi) is revealed. AzhwAr says "Oh ignorant people! If you can recite vEdham that is fine to do. But even if you are unable to do that, please understand that the purpose of vEdham is to reveal the divine names of bhagavAn and induce everyone to glorify them. This is the essence of vEdham, so you learn to glorify bhagavAn through his names". This reference to "mAdhava" often is identified to dhvaya mahA manthram since it explicitly identifies bhagavAn as srIman nArAyaNan (the husband of srI mahAlakshmi). 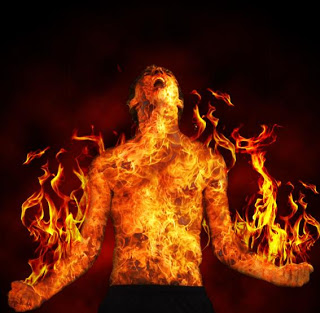 Translator's note: piLLai lOkAchAryar identifies the essential qualities of a srIvaishNava in mumukshuppadi sUthram 116. One of the essential qualities is - "pERRukku thvarikkai" (பேற்றுக்கு த்வரிக்கை) - to crave for the ultimate goal of doing eternal service to srIman nArAyaNan in paramapadham. Once we understand that there are so many avenues to pull us down and keep us in the samsAram and whatever we accomplish here are very insignificant, it will be unbearable for us to stay put in this material world. This feeling of total suffering was revealed by nammAzhwAr in the first pAsuram of thiruvirutham (his first prabandham itself) by saying "iniyAm uRAmai" (இனியாம் உறாமை) - I cannot bear this anymore - it is like standing on fire.

Translator's note: When we offer something to some one we consider as if it is owned by us and then we offer it to the other person. Similarly, in this case, when we offer ourselves to bhagavAn, it will expose our understanding that we were independent before and now submitting to bhagavAn. nammAzhwAr says that "I offered myself to you; but thinking about that act of offering myself, I am ashamed of that act" in thiruvAimozhi 2.3.4. This is already discussed in 67th entry. 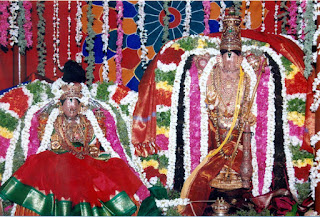 Translator's note: This brings out the universal nature of dhivya prabandhams which can be learnt and recited by any one. Unlike vEdham, ithihAsams and purANams which are accessible to specific persons who are qualitfied and even for such qualified persons only during specific times, thiruvAimozhi (and dhivya prabandham) is accessible to every one at all the time. In AchArya hrudhayam, azhagiya maNavALa perumAL nAyanAr explains this principle in a detailed manner. First in chUrNikai 70, he explains the various types of pramANams and the focus of such pramANams.

In chUrNikai 73, the pure nature of thiruvAimozhi (and dhivyaprabandham) is revealed through an example.

A clay pot is not like a golden pot.

Gold is naturally pure. It can be touched by anyone at any time. Clay pots have many regulations, only certain persons can touch them and only certain times - if touched by unauthorized persons or during unauthorized times, it becomes unusable for any auspicious activities. Golden pots have no such regulations. Similarly, AzhwArs' pAsurams are pure and can be pursued by any one.

When entering into a flooded river, we should take the help of experienced persons. Similarly, periya perumAL is an ocean of auspicious qualities, when we venture into enjoying his qualities we should take the help of pirAtti (who is always enjoying emperumAn's auspicious qualities). This principle can be observed in srI rAma's life itself in the srI rAmAyaNa slOkam "sahapathnyA visAlAkshyA nArAyaNamupAgamath" (ஸஹபத்ந்யா விசாலாக்ஷ்யா நாராயணமுபாகமத்).

Translator's note: It is explained in the above srI rAmAyaNa slOkam that when srI rAma went to perform thiruvArAdhanam to his family deity "srIman nArAyaNan" (who will eventually be established as srIranganAthan in srIrangam), he was accompanied by sIthA pirAtti who has beautiful broad eyes. Here, srI rAma himself worshipped srIman nArAyaNa to himself demonstrate to others how his worship should be performed. Our pUrvAchAryas have always insisted that when we approach bhagavAn, we go through the purushakAram (recommendation) of pirAtti only and we serve them together only. nammAzhwAr also highlights this principle of bhagavAn being an ocean of auspicious qualities in thiruvAimozhi 10.7.1 "senjoRkavigAL uyirkAththAtcheymmin" (செஞ்சொற்கவிகாள் உயிர்காத்தாட்செய்ம்மின்) - Oh, great poets! (nampiLLai and periyavAchAn piLLai highlight that mudhalAzhwArgaL are addressed here) you first protect yourself when you start glorifying the divine auspicious qualities of bhagavAn, since bhagavAn is an ocean of such qualities and you can easily be drowned.

Full series can be viewed at: http://ponnadi.blogspot.in/p/divine-revelations-of-lokacharya.html.